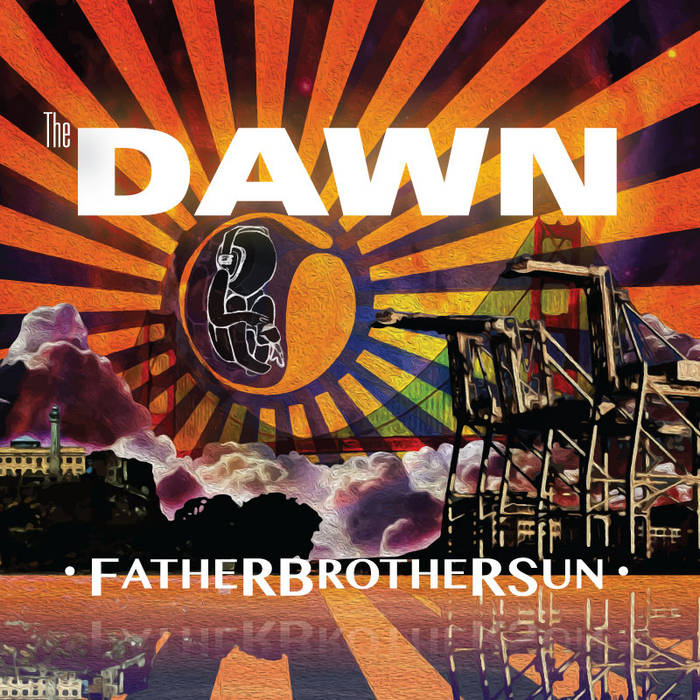 ABOUT THE ALBUM:
This album is a compilation of writing, arrangement and production by FBS. Each member of the band brings a brilliant strength to the table, which coalesces perfectly together. The album title was born from the logo, as the band's name speaks to the feminine giver of life, the Sun, and within the it is the masculine in gestation, awaiting birth, and forever growing in the womb of our star. The Dawn is the rising of the band over the Bay Area, and only the beginning of their venture into the sky together. This album shares songs the band members have compiled and play live, and is a promotional to play together, as a taste of what is here, and what is to come.

ABOUT THE BAND:
FatheR BrotheR Sun, also known as FBS or FRBRS, is an 8-11 piece band with 1-4 main vocalists, a rhythm section which fluctuates between a band with and without a horn section (including bari sax and trombone; 1-2 electric guitars; bass; drums; percussion; and keys). We are a wonderful fusion of funk, hip hop, r & b, rock, and soul music. The band was forged together by band leader Atiim Chenzira to highlight the vocals and song writing of each vocalist: Chloe Jean, Freedom Bean, Ali Hammad, and himself. Each vocalist bring a uniquely different style and complimentary range to the band, which is masterfully expressed through the bands compositions at every show. FBS also re-interprets select cover material from their inspirations, which collaboratively produces a sound reminiscent of Sly & The Family Stone; Gil Scot Heron; and Tower of Power, among others, to the stage. Their stage presence is magnetic, and energetic, soulful, and captivating.

FBS began playing around the Bay Area in early 2014 to support Atiim Chenzira's newest body of work, 'Aspectz Of Me: (Vol. A & B)', a double album of 22 tracks. Later in the year, Chloe Jean released her newest album, titled 'Freak', and the band has been incorporating this body of work into their live shows too. In late 2014, FRBRS entered Skyline Studios in Oakland to record live versions of Chloe Jean's, and Atiim's original songs, as well as a song from Ali Hammad's latest single, 'Grey Skies & Romance', along with a secret track written by Bill Withers, as FBS weaves his songs into their live sets because the three vocalists all agree, he is a legend and an inspiration they all share in common.

ABOUT THE ARTWORK:
Jack Eastgate, an amazing Fijian Bay Area artist, used his collage style digital oil painting to create a texture unlike most modern artists, to bring to life the art of album covers that excites the eyes and makes a bold statement. Some of the most recognized land marks make a cameo in his design. FBS wanted symbols of the Bay that speake to SF, the heart of the Bay Area, and Oakland, and it was achieved. You can find more designs by the Eastgates at EastRandStudios.com

Interviews With Butcher Brown and Slauson Malone, plus LP of the week by SAULT.